Waiting on Wednesday is a weekly post hosted by Breaking the Spine that spotlights upcoming book releases that you’re eagerly anticipating!

This week I’m spotlighting Tarnished City (Dark Gifts #2) by Vic James. At the end of last year/beginning of this year I had the opportunity to read and review the first book in the series, Gilded Cage, early and I ended up loving it so much. It was my first five star read of the year and left me wanting to have the second book in my hands ASAP. So, you know, I am beyond excited for this book. Counting down the days and wishing it was September already excited. Which means I had to do a Waiting on Wednesday post for it. I just really can’t wait to find out what happens next! 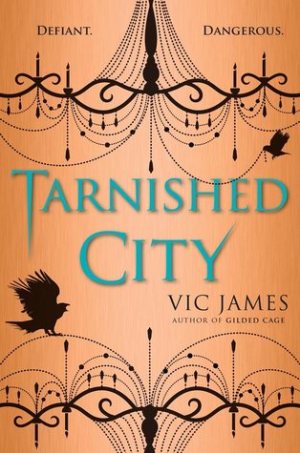 The continuation of the darkly fantastical Downton Abbey-esque series—set in an England where curiously gifted aristocrats reign—and the commoners who are doomed to serve them attempt to spark a revolution.

The rebellion to free the lower classes from ten years of forced service to unfairly advantaged, magically powered rulers may have failed. Teenage siblings and would be revolutionaries – one imprisoned, the other desperate for aid – have seen their magical allies stripped of their power. While the mysterious young aristocrat has revealed the incredible extent of his dark gifts.

You can pre-order it on: Amazon, B&N, Book Depository, Google Play, and Kobo

What books are you excited for!?

If you do Waiting on Wednesday link me to your post so I can see. 😊